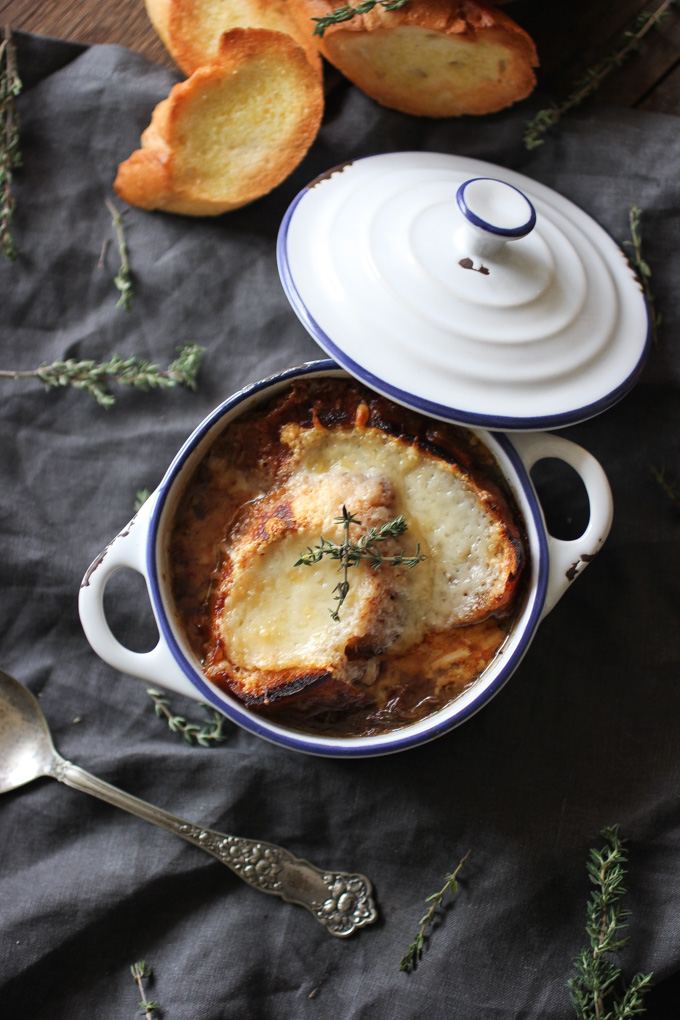 As Sydney’s soup weather drags on, I’ll take this opportunity to bring you one of my favourite soup recipes of all time. In my opinion, no other soup is as satisfying or as comforting as a big steaming bowl of gorgeously dark bronze French onion soup, topped with the mother of all croutons obscured by a blanket of tongue-scorching melty Gruyere cheese. 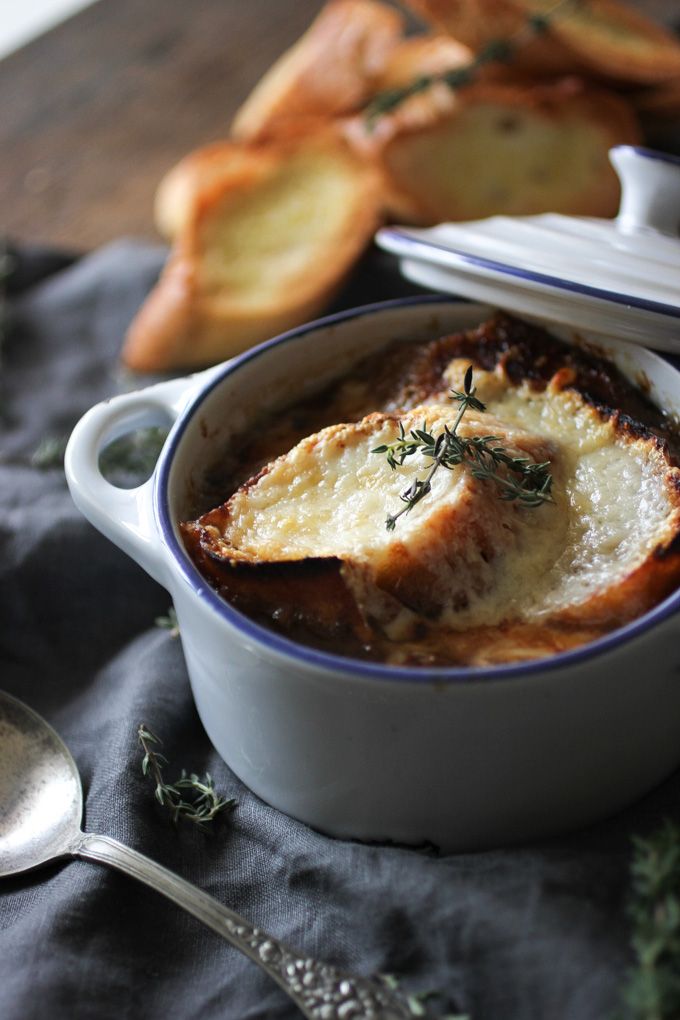 I’m going to come right out and say this now before we get into the nitty-gritty details: this is NOT one of those quick recipes where you dump some veg and broth into a pot and whizz it up and have soup on the table within 30 minutes. Nope.

Although it is pretty simple & straightforward (I promise!), this soup requires a little more TLC and time, so if you are not a fan of slightly more time consuming recipes (boooo), this might not be the one for you. IF, however, you don’t mind investing some of your time in it, you will be rewarded with the most flavour-packed bowl of deliciousness you could possibly lay your greedy fingers on. Guaranteed. 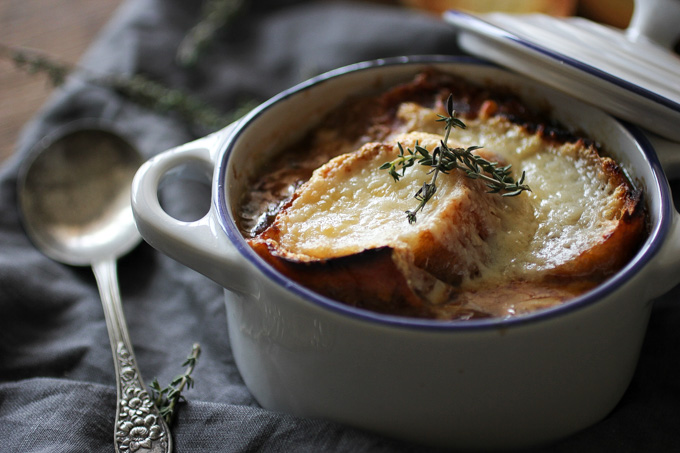 If you are still reading then I assume you are on board (woohoo!), so let’s talk details.

The key to good French onion soup is one thing and one thing only: caramelising the onions properly. I think many recipes are very misleading when it comes to giving instructions for caramelising onions, all for the sake of cutting down the cooking time and offering a ‘quick’ recipe that people won’t feel intimidated or too lazy to attempt in this fast paced world. But here I am to tell it like it is; caramelising onions correctly takes patience and quite a long time. We’re talking about an hour or so.

You see, you don’t want to simply brown the onions or burn them, no…caramelising onions is the process of breaking down the natural sugars in the onions slowly until their structure changes completely, sweetens deeply and becomes almost jammy in texture. Skipping or half-assing this step is essentially ruining your soup and you might as well not bother making it at all. 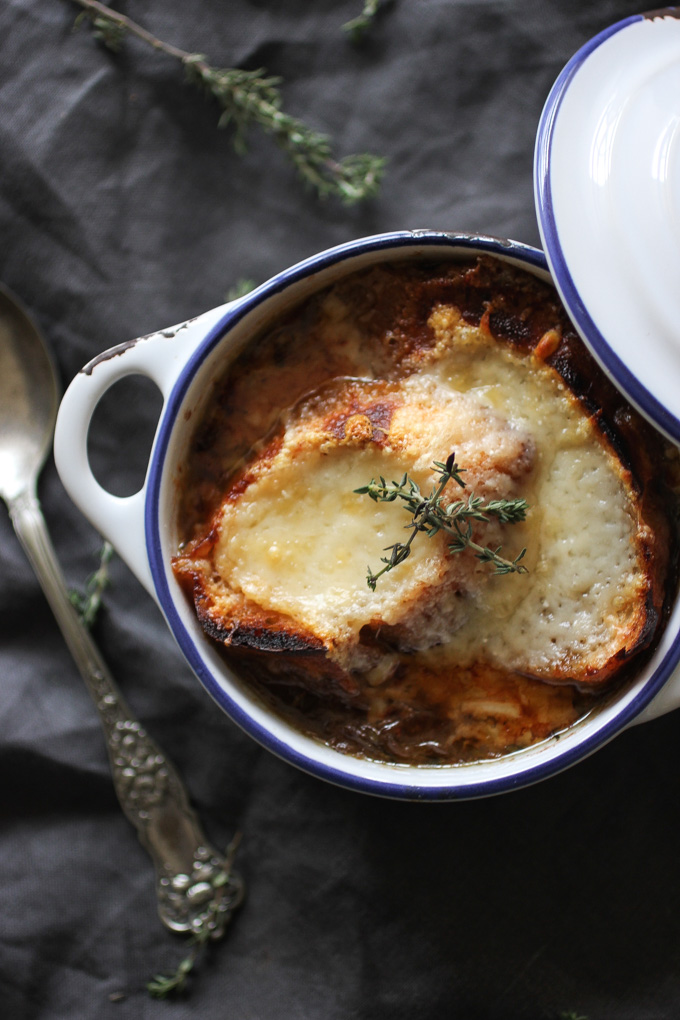 So, dear readers, if you trust me, let me outline for you the realistic and honest method to properly caramelise onions, because I would never lie to you just to make a recipe seem quicker or easier. Some recipes are just worth the time.

You start off with a large mountain of onions, cut into thin-ish half moons. Keep a big box of tissues nearby and take this opportunity to let out any pent up sobs, because you WILL cry. Hard. 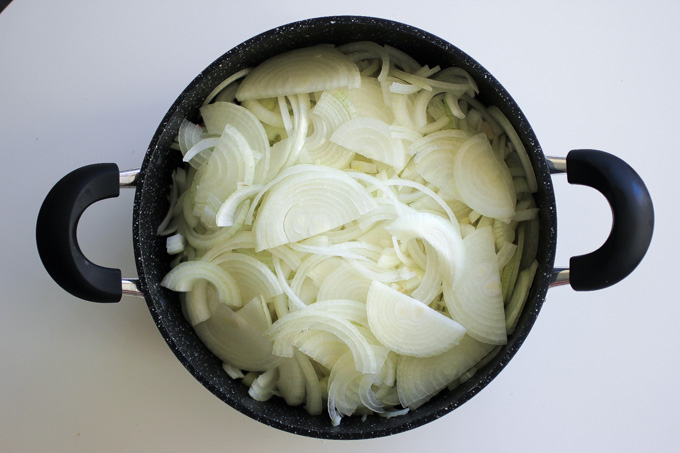 Don’t worry about the seemingly massive amount of onions, by the time you are done with them, they will have cooked down to not even a quarter of their original volume!

The first stage of cooking involves melting some butter, tossing the sliced onions in, covering the pot and leaving them alone on medium-low heat for 15 minutes. This will make them sweat and soften and release all their moisture.

TIP: Use a nonstick pot to avoid onions catching at the bottom and burning.

Next, you take the lid off and turn the heat up slightly to medium-high. Add in a little salt and a dash of sugar (which helps give the existing natural sugars a little boost) and begin the marathon of patiently stirring every few of minutes until caramelisation is achieved. Put on some good music, grab a drink and enjoy yourself because this stage can take anywhere between 30 to 45 minutes. You want the onions to slowly develop a deep, shiny golden brown colour and become almost candy like. You don’t want to burn them, just get them to a gorgeously amber bronze colour. 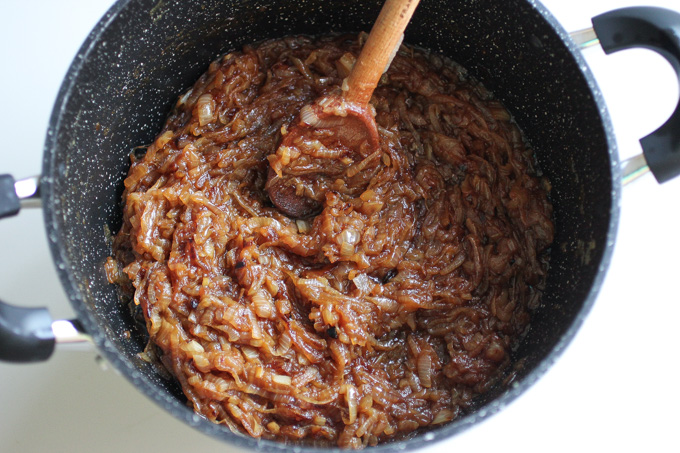 At this point I like to add a splash of balsamic vinegar for extra colour, sweetness and complexity, as well as a few bay leaves and a small bunch of fresh thyme for that signature French onion soup flavour. If you can’t get your hands on fresh thyme, dried will work just as well.

Now this part may seem like blasphemy, but I actually make my onion soup with plain water. No stock or stock concentrate or any of this nonsense. Most cooks will insist that a good onion soup is as good as the onions and the stock, but I really beg to differ. I find that by using water, the flavour of the onions takes centre stage and shines more brightly than when stock is used, as opposed to a ‘chicken or beef onion soup’. But, as always, it is really up to you.

So you add your liquid, simmer for 20 more minutes and voila…the BEST French onion soup is only a cheesy crouton away from reaching glorious soup perfection. To make the crouton, you toast some slices of good quality baguette till crisp. Once the soup is ready, ladle portions into individual ramekins or ovenproof dishes and place a slice or two of the toasted baguette on top, followed by a generous shower of grated gruyere cheese. Pop it under a super hot grill for about 5 minutes and devour immediately. 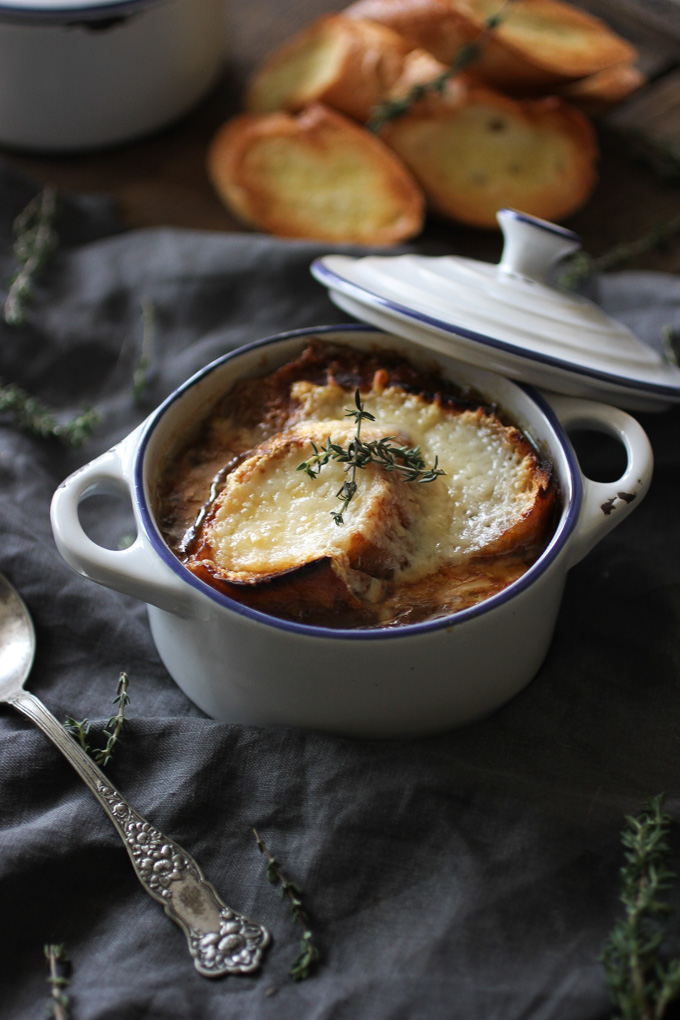 If you have the self-control required to wait long enough to avoid burning the roof of your mouth, then we can’t be friends. 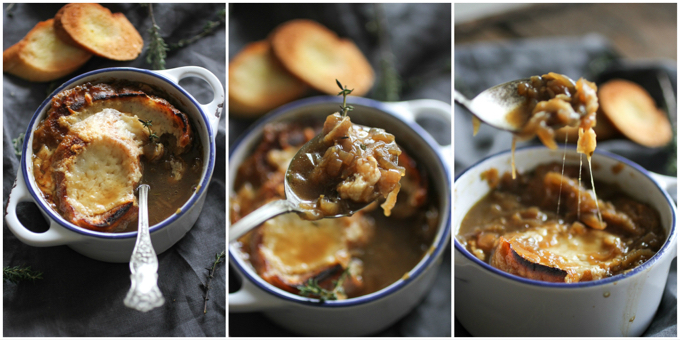 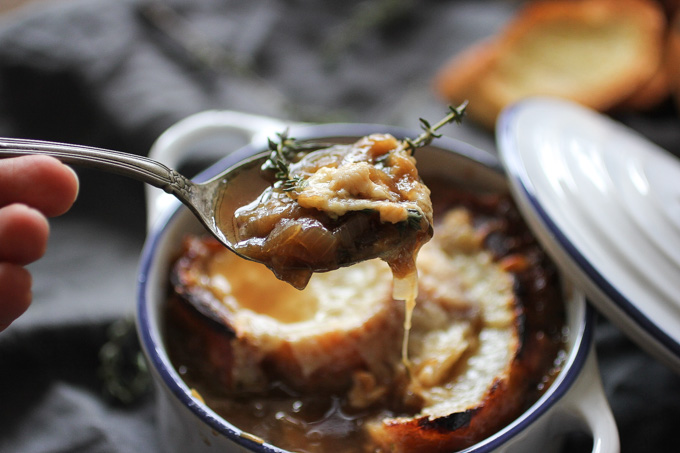 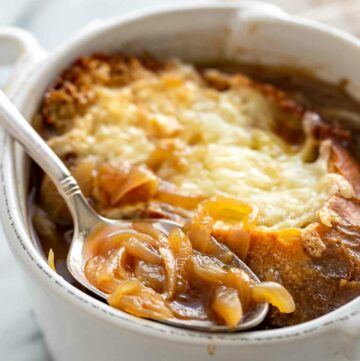 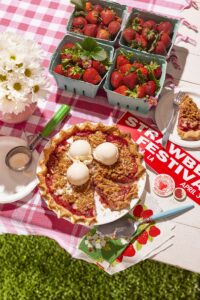 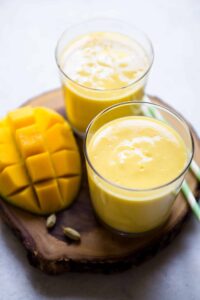 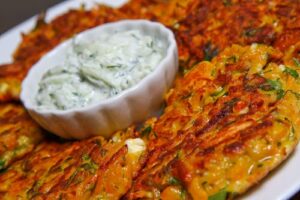 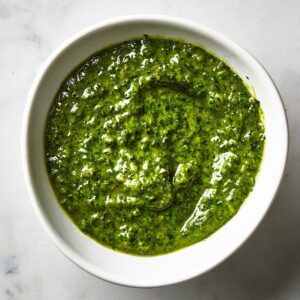 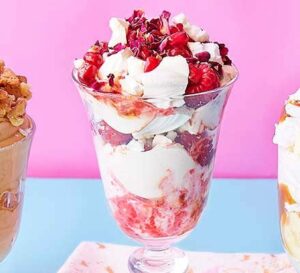